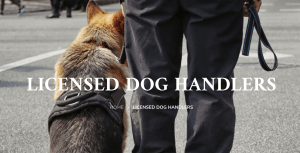 K-9 Units and their benefits/importance

K-9 Units generally refer to a squad of LEAs (Law Enforcement Agencies) consisting of a number of ‘canines (CA = K, NINE = 9)’ or dogs specially trained to tackle people and take down suspects and are often trained to seek and locate potential drugs. These units are widely successful as the abilities of both humans and animals come together, These K-9 units usually make use of dogs that have predatory behaviour and are sort-of thought as aggressive, these units include the types of dogs such as German Shepherds, Rottweilers (for special applications), Belgian Malinois, Dutch Shepherds, Bloodhounds and Labrador Retrievers (Used mainly for assistance in drug-busting and explosive detection operations). These types are generally chosen as a K-9 mainly due to the special abilities these dogs may offer.

Since it is established as a ground fact that K-9 dogs are tactfully beneficial in providing aid in public service, their area of use has widely expanded since then. The use of K-9s in security firms have proved to be very fruitful since these units can assist in ground-clearing, human tracking and patrol applications which also serve as one of the main services any security firm offers.

According to the National Police Dog Foundation, there are various types of K-9 units depending on their area of work, some can be used for detecting drugs, some for detecting explosives while others can be trained for patrol purposes, a K-9 Unit can only be trained for any one application at a time either it be detection or patrol.

Services of K-9s in our field of work

Now that it is clear that security firms most commonly make use of K-9s specially trained for patrol applications, here is how our security firm intends to use K-9 units to boost and upgrade our services that we provide to our customers.

Since a chunk of our services include patrolling operations of private and enclosed areas, often burglars or trespassers that have breached the area without permission are quick to notice the patrols and tend to flee, chasing operations on foot are not as viable and a running officer cannot catch a trespasser as quickly as a running and specially trained dog can. The average running speed of a human is approximately 13.5 km/h whereas a dog can run up to speeds of 30 km/h, a running dog can catch up with a running trespasser 2 times as quickly as compared to a security officer and hence K-9 units are beneficial for such applications and scenarios.

Similarly, as mentioned above that dogs that quicker and more flexible than humans in such conditions, they can also navigate narrow and restrictive areas with much speed and agility, potentially eliminating the chances of fleeing for the trespasser or such violator of rules. These K-9 units generally increase the reach and grab ability of the officers and guards by a significant amount.

K-9 patrol units, since they have the ability to track down the scent of humans and locate them can be very beneficial in applications where security firms are required to clear out an area or to secure a premises in no-entry hours, to detect trespassers and vagrants from areas such as closed-off construction sites, private parks and enclosed/fenced properties, K-9 units can do the job quicker by centralizing and shortening the sphere of search for the officers and locating the suspect instead of officers having to look at each and every corner and crevice to locate such trespassers.

It is a well-established fact that dogs have much greater smelling capability than that of humans, a dog approximately has 300 million receptors that detect smells while there are only 6 million in humans, dogs have roughly 50x greater smelling capability as compared to an average human and this capability allows them to differentiate between the smells of different humans and allows them to differentiate between their handler and a distant trespasser. 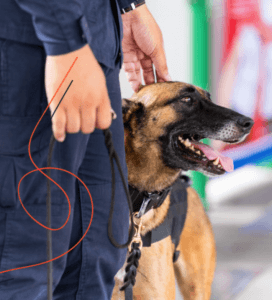 K-9 units are very obedient to their handlers or ‘masters’, this allows for a special use where these units under the supervision of a handler can be used to close-off a premise for unwanted people, these units do require some training in-order to identify who is a threat and who is not but with adequate training these units can be used to secure private functions, sites, meetings and areas that prohibit entry of outsiders.

There is a common misconception that these units sometimes harm people they are not supposed to and that only happens when the dog is overly-aggressive or the handler didn’t take certain precautions to ready the dog for such applications, our security firm have specialized officers who have specially trained to handle such dogs and know how to control them under a certain situation. Hence, eliminating the element of these K-9 units being a source of harm for anyone.